Our last installment of the Real Talk series focused on helping your influencers understand your brand messages, while also spreading the word via their own personal style. Picking up at where we left off, you’ve now provided the influencers with your brand’s message pillars and given them the guidance to use their creative freedom to spread the word. So what’s next? – actually executing the campaign. This is a crucial point of your relationship with your influencers. You can’t look at the campaign with a set it and forget it attitude. Using influencers can reduce the time on your plate usually associated with content creation during a campaign, but it doesn’t mean you aren’t involved with the execution. You must be readily available to your chosen influencers every step of the way – including during the entire duration of the campaign.

Throughout the course of a campaign things often don’t go as planned. It’s likely that a situation will arise in which the influencer will need assistance. Someone from your team should be ready to engage with them when and if they have questions. Influencers can range from highly experienced to first-timers, but no matter their experience level, situations can arise where you must be ready to jump in to help them, guide them, and sometimes even solve a problem.

Here are some common situations that you could run into:

At times, your brand may have fluctuations in the quality, functionality, service, or style of the product/service influencers are promoting or representing during the campaign. Being that your influencers are in essence your brand ambassadors, they should be informed when something within your company or products changes. Influencers will be engaging with your target market on a continuous basis, so they must have up-to-date information. If they don’t, the trust they’ve already formed with their audience, the audience you hope to connect with as a brand, could erode..

Like we previously mentioned, your influencers may range in experience in their new position. Sometimes crafting the right message can hold a high level of pressure and it’s not uncommon that those influencers will have questions on how to best represent your company.

Remember, you are the subject matter expert and if you walk them through their problem area they will gain a more well-rounded understanding of it, which means they can more accurately represent your brand with their followers.

Also, there is the chance that a personal emergency will arise for your influencer. Changes are unforeseen and it’s important to be prepared to have back-up plans, when necessary. With that in mind, you may want to craft an influencer wait-list.

It’s not just for the benefit of the influencer to make yourself available, but also for your brand. If an influencer posts something they shouldn’t, how would you handle it? Or what if one of their followers comments with something that puts your brand in a situation where escalated response is needed? Someone from your team should be constantly monitoring what your influencers are posting and the reaction of the community. Influencers aren’t always the best people to respond to certain situations. You need to know when and how to step in. If one of the situations described here comes up, remember to communicate with the influencer involved so you’re coordinated in your response. The influencer should be made aware of the situation and given guidance on how to proceed going forward.

Though your influencers can be seen as separate entities to your organization, they are major players in achieving your brand goals. Today’s marketing structure is so highly reliant on word of mouth that it’s important to be involved throughout every step of your campaign in order to make the best direct impact.

Other posts in the Real Talk Influencer Marketing Series:

Real Talk: Helping Influencers Understand Your Brand Messages & How to Personalize Them

Every brand has its own way of talking.

Certain words or phrases may be used while others are actively avoided. Statements could be simple and direct or full of imagery and emotion. Tone might be educational and helpful or sarcastic and humorous. A brand’s talking style differs greatly from one to the next, but on top of the style, every brand also has certain brand messages that emphasize its product or services, competitive advantages and experience. Altogether, there’s a lot that goes into how a brand presents itself.

When you work with influencers, it’s important that they understand your brand messages and style. Your instinct may be to approach this task the same way you would when educating marketing employees and agencies on your brand, but the two scenarios are very different. While it might make sense to provide your ad agency with a Brand Style Guide, doing so with influencers would probably be overkill, so much so that some may even question working with you.

Remember, influencers have their own unique voice, much like your brand. The value for you in working with them is derived from that voice they’ve already formed. It’s that voice that led them to become an influencer and accumulate followers who value their opinion. The worst thing you can do is try and force your brand on them so much that their voice is minimized. You want to tap into their network positively, not have it appear as if they’re simply a hired shill.

So how do you maximize the voice of your influencers? Prioritization.

It’s helpful to give a booklet or document to your influencers, but you can’t put everything in it as you would with a Brand Style Guide. You must prioritize what they need to know so you don’t overwhelm them with requirements. Decide what’s most important, which differs for every brand.

Sometimes these message pillars are all that influencers need, other times a brand needs to give them more. One other thing that needs to be included, and what’s just as important as giving influencers your message pillars, is making sure they understand how they can personalize them. Personalization is very important because like I said earlier, an influencer shouldn’t appear as if they’ve become a shill for your brand. The expectation on influencers shouldn’t be that they produce content that looks like all other corporate content. It should look original, authentic and along the lines of what they’ve done in the past. You could share examples of what this means, but I feel like that may even be too leading. A better approach is probably sharing this concept with the influencers and providing them with someone they can contact if they have questions. You want to utilize the creativity of the influencers and providing examples could potentially block some of that creativity.

The next installment in our Real Talk series will discuss how you monitor an ongoing campaign and the activities of your influencers. Come back next week to learn more!

Other posts in the Real Talk Influencer Marketing Series:

You’ve done your research and decided which influencers you want to work with, but what now? How do you establish a relationship between your brand and these influencers?

The first step is creating the influencer campaign.

— Set your objectives. What is the purpose of the campaign? Are you trying to raise awareness for your brand or an event? Do you want to increase engagement or create brand advocates? Determining your objective is very important because it will help dictate what your influencers will do for you.

— Outline the tactics. What exactly will influencers be doing? They’ll want to know this, so you need to have answers ready for them. Are they taking photos? Videos? Of what? Where? When? You should have all this documented, along with examples of what you would consider perfect pieces of content. This helps them understand what’s expected of them.

— Determine your KPIs. How are you going to assess if your campaign was successful? The first thing you need to do is figure out the metrics, or key performance indicators (KPIs), you’ll use to make that determination. If your objective is focused on brand awareness, then shares could be a KPI. If your objective is engagement, likes or comments could be one.

— Benchmark goals. Your influencers need to understand what they’re striving for, otherwise they’ll be doing things without any sense of what’s good and what’s not. After you determine your KPIs, assign a specific goal number to each. 250 shares, 75 comments, 125 clicks. In doing this, your influencers have a target and something to strive for, which should make them more efficient and effective.

—Set the timeline. What’s the duration of the campaign? How long will the influencers be working with your brand? This is an important decision since it will affect your budget.

Now package all the earlier components of the campaign into one document (objectives, KPIs, tactics, etc.). After hiring your influencers you’ll send them this document, but you want to have it prepared beforehand in case any influencers have questions about the campaign. By preparing the document in advance you’ll be able to answer those questions.

Once the campaign is outlined it’s time to hire the influencers.

Using Virtual Agent within Mattr, you can hire influencers directly. No need to involve agents, lawyers or contract specialists. We’ve done all that for you to take the hassle out of the process. We use a pay-by-engagement model that’s simple and doesn’t include the lengthy negotiations that can accompany other payment models. The only area where negotiation might be needed is in those special circumstances where the influencer may receive something other than monetary payments, such as free products, free tickets or hotel stays or a product discount. 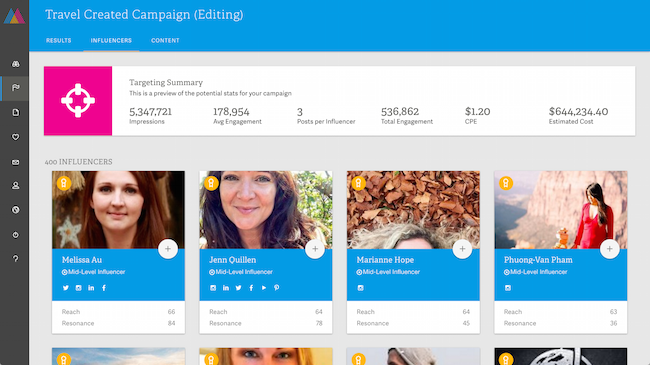 After hiring your influencers, answer any questions they might have about the campaign and make sure they’re comfortable with their role.

Next up, you’ll share more information about your brand with them so they’re informed on creating content that aligns with it. Check back here next week for more info on that topic.